Today I wanted to take a little break from talking about the next update and instead finally reveal some major changes coming to the wardrobe and transformation systems in the not-too-distant future. There’s some good stuff to cover today, so let’s jump right in!

When I first started making The Company I had less than zero intentions to introduce any kind of wardrobe system. Now, not only is the game populated with clothing, but a paperdoll representation of said clothing has been released as well! It’s a neat addition to the game that, I feel, has never really lived up to its potential.

There are a number of reasons for this. Most prominent in my mind is the absurdity of clothing combinations and how the game is supposed to figure out how to classify your overall outfit. Sure, go ahead and throw on a sheer top, miniskirt and fishnets to show off your loafers, necktie and cotton bra, that’ll push you into the “slutty” category and help you achieve your goals of… something? It’s a bit of a logistical nightmare on the backend and I’ve been loathe to add more to it as it would only increase the complexity of what’s already a fairly nonsensical system. Of course that doesn’t even touch on the other issues such as generating the paperdoll artwork assets for each new piece of clothing as well as the fact that clothing itself doesn’t do much from a game mechanic standpoint.

But… People like playing dress-up! I mean, seriously, I would have quit WoW two years earlier than I had if it weren’t for transmog…

Ultimately, I decided to take things from the micro level to the macro and remove wearable clothing items from the game entirely and replace them with complete “outfits”. So, rather than wearing a cute blouse, skirt, pantyhose, and high heels, you’ll simply put on the “Office Attire (F)” outfit. By having a complete outfit, we can easily assign attributes to the outfit as a whole. In this case, the Office Attire (F) outfit is a formal, feminine outfit and would be reacted to as such. Effectively, it allows the game to handle clothes in the way it was always meant to by removing a ton of variance from the equation.

A Tale of Two Models

To facilitate the above changes, my artist and I have been going back and forth since early last year to overhaul (and improve) all the artwork assets for the game. We started with Ava and Dakota’s new models in the summer of last year, and only just finally started wrapping up the MC.

Now with that all out of the way, let’s finally check out the new MC model! 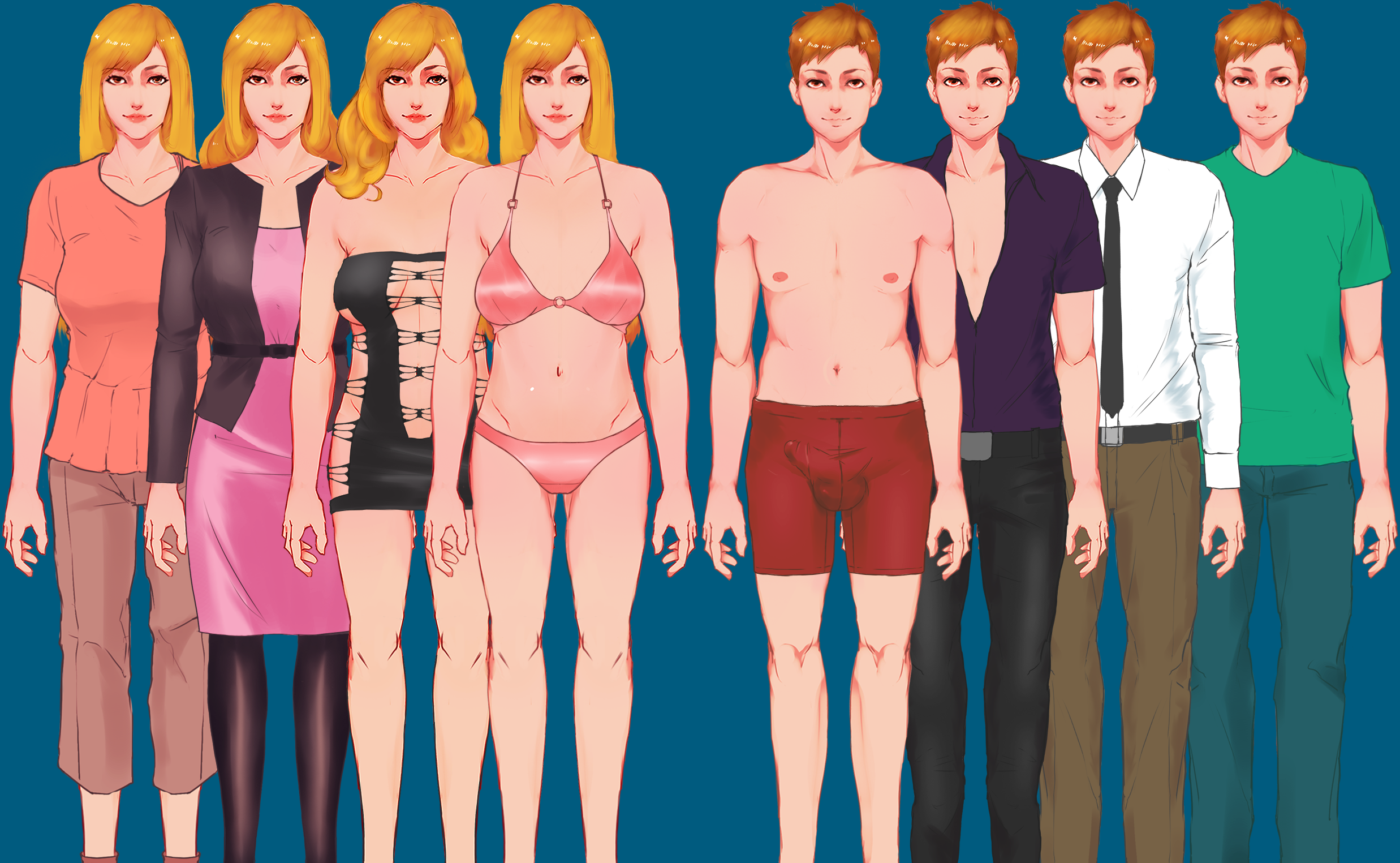 The new MC models follow the same clean design philosophy as Ava and Dakota’s redesign, and will go on to inform the rest of the characters as well. When the wardrobe update does go live, expect to see some completely new outfits as well! These will be great on the off-chance you need to clean a residence, work at a cocktail bar, or break into the cosplay scene!

This section won’t be quite as arm-wavy as the last one, but I wanted to also touch on some of the other, arguably even more important changes the wardrobe update is going to bring with it. Specifically, the yet-to-be-numbered wardrobe update is also going to be setting up to streamline the transformation system.

While it’s working “as intended”, there’s still a lot of room to improve. While nothing is completely set in stone in terms of execution, below you’ll find a general idea of what you can expect from the transformation revision coming with this update.

Take the above with a bit of salt, as the stat rebalance is still sitting at the whiteboard phase. After February’s update releases, all of the above will start to take a little more priority with the hopes of getting it into March’s content update.

I hope this was a fun look into what’s bubbling on the backburner. Next week we’ll be back on topic for the Diana-focused January update as well as a couple surprises! Thank you all for your continued feedback and support!