Everyone super stoked for the upcoming back end maintenance update? Does fixing antiquated code structure get you all hot and bothered? No? Well, maybe today we can change that!

While Update 3.3.0 is effectively one big “fix all the things!” update that aims to bring ALL the game’s systems up to snuff, that doesn’t mean players’ shouldn’t expect to see anything new. In fact, some of the key changes coming with the new update will have a very meaningful impact on the game both immediately and moving forward. Specifically, the lion’s share of June’s development time will be going towards three major pillars:

Of course there’s plenty of other things going into the update as well, though the three items above will be the most impactful. So, let’s get into them! 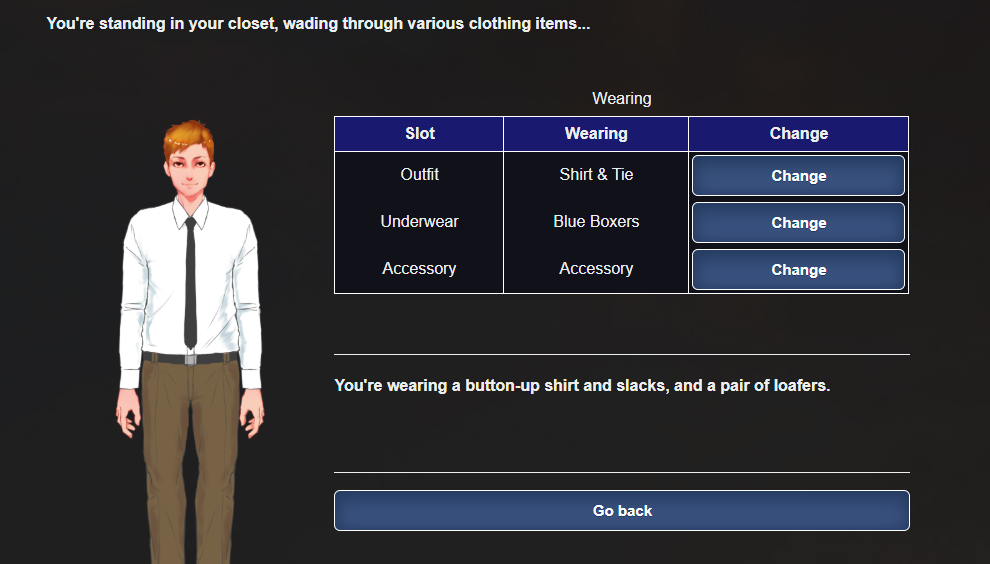 The new paperdoll models are now in the game and feature a much cleaner, sharper design than what is currently on the live version. As of yesterday, those with access to the development builds have had a chance to play around with the new models and get a glimpse at all the new and redesigned outfits. There’s really not a whole lot to say about the new models themselves outside of I think they look pretty great and I’m excited to share them with everyone in the next update.

The redesigned wardrobe system, on the other hand, warrants some extra discussion. The biggest apparent change to the system is that that individual clothing items have been consolidated into complete outfits. Rather than choosing to wear dress shoes, slacks, dress socks, a button-up shirt, and a tie, you’ll now simply select the “Shirt & Tie” outfit from your wardrobe. Underwear works in much the same way, with bras and panties coming as sets rather than individual items. The result is a system that’s much easier to manage and parse on the back end, such as when needing to determine what type of outfit the MC is wearing or even if the MC is wearing a specialty outfit, as well as one that’s much quicker to manage for the player due to much less clicking.

Of course, an understandable reaction to this change may be to see this as a reduction of options and customization. I can certainly see that, though I’d also argue that most players are following clear outfit templates anyway, but at the end of the day none of that matters because…

Upon downloading the local version of The Company, players will discover a new “data” folder alongside the pics directory that house four new JSON databases. Each of these files corresponds to one of the four clothing categories and allows you to easily edit existing outfits and accessories, or add new ones altogether. These files allow for complete control items, including primary outfit type, additional outfit tags, specific pieces of the outfit, cost, what shop sells it, even the ability to point towards specific image files. Of course, documentation will be provided when the update is released, so if this is of interest to you then you can definitely look forward to that! And if that’s not your thing, then you’ll still be able to experience a bunch of fun new outfits and models, not to mention an improved shop scene for purchases.

As a long-time-though-not-as-of-recent Blizzard fan boy, my favorite part of any WoW-related Blizzcon panel was when the devs would take some antiquated or unpopular concept, like hit rating or weapon skills, and casually follow it up with… “Gone!”. Anyway, to the point…

Ah, that felt good… So let’s talk about Relationship (formerly Love), Corruption (formerly Lust), and Mind (formerly… Mind…), and what they were meant to be.

Stripping away all the context and setting and themes, these stats were always meant to act as “a thing for players for grind for”. Now, that’s not a bad thing. Having things to grind for makes for a compelling reason to continue playing a game so long as it doesn’t make the game tiresome. Of course, you need to have a reason to grind for the things you’re grinding for, which is where things kind of fell apart in The Company. Relationship was intended to unlock content by building up someone’s affection for you, leading to eventual romance routes. Corruption was similar in that it would, in some respects, bypass the need to use serums to unlock certain scenes. Mind would be similar to Corruption were it to ever actually get off the ground.

Over the course of development, however, the game shifted away from using a stat-based progression system and more towards an event-based progression system. What I mean is, under the original design if you wanted to date Penny you’d need only to raise her Relationship up to a certain level and you’d be dating. Under today’s model, you would need to take her out for a day on the weekend, then opt in to an after-work event, then after a few more events you would naturally end up in a position where you would be “dating”. Under this model, that stat grind feeling more arbitrary and awkward at best, confusing and frustrating at worst.

Digging down to the intent of stats as well as the intended effect they would have on the player and the game helped narrow down the best way to replace them while maintaining the spirit of that intention also holy crap run-on sentence much? Coins pay homage to Wandrer’s more mystical works by themselves being a someone mystical currency. You’ll earn them the same way you would gain existing Relationship and Corruption stats, by performing the same actions you are currently. Rather than growing stats with specific characters, you’ll instead grow your supply of one of three different coins. As is to be expected of an evil corporation like The Company, these are the Wolf Coins, the Ram Coins, and the Hart Coins.

Wolf Coins are earned through interactions with coworkers both in and out of the office. Ram Coins can be earned through social relationships such as Chris and the mall store clerks, and Hart Coins can be earned through interactions at home with Ava and Dakota. Of course, as stated earlier, the grind means nothing without the payoff, right? With the appearance of these coins also comes the first iteration of Saya’s Shop. Saya’s Shop will become available through the usual means once per week and allow you to exchange your hard earned coins for vanity content such as alternate outfits for NPCs and “What if?” style side stories. The shop will be expanded over time, and what follows isn’t representative for this specific update, but to give you a general idea…

As the shop itself is fantastical, so too are the rewards. That is to say, alternative outfits adhere to the Big Heads Mode theory of unlockable content, as in no one but you will actually notice them, and the what-if stories are just that, fun what-if scenarios you’ll get to see play out. This gives us a great way to flex our creative muscles, or to put it more accurately, take a long creative stretch, and it gives players a chance to have some more just-for-fun lewdness!

Finally, the last major initiative coming in this update is not only completing implementation of image pack support throughout the entire game, but also taking some time to reevaluate the image directory as a whole. Now that image pack support is more uniform, I was able to take the time and play with alternative image formats and video codecs and after what feels like an eternity of getting asked about it, well… 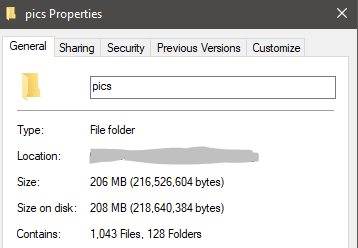 There it is. The complete image pack brought down by roughly 90% with no quality loss over GIF images and confirmed functionality across all supported browsers, including Safari. What’s more is that this can pave the way for much higher quality images to be added to the game without a hugely significant impact on the file size. Smells like another community event, no?

That’s going to be it for this week. Expect the next devblog to touch on a few additional odds and ends concerning the upcoming update. Hopefully this has made everyone a little more exciting for this boring maintenance update than they were before! As always, thank you all for your continued feedback and support. Stay safe, stay healthy!