It’s the big one-double-OH BABY! Full disclosure, I didn’t have anything prepped for it, so free artwork for everyone at the bottom of the post! Is it 2021 yet? Let’s get into it…

Last week’s devblog brought up some most triumphant (and in some cases totally bogus) discussion concerning upcoming additions to the game, most notable in the stat rework and removal. Now, anyone who remembers the Tasha fiasco earlier in development knows that I’m not one to back down from an idea that I feel will improve the game, and will actively defend it if I’m convinced it’s for the best. That said, despite what certain message boards and comment sections might believe, I’m constantly taking community feedback into account whenever I’m looking to make any sweeping additions or changes. When I’ve made a misstep, or a miscalculation, I’ll be the first to admit it.

So let’s talk about that stat change again, shall we?

As a quick refresh, NPC stats like Relationship and Corruption were adding little more than green and pink text when interacting with NPCs. Since unlocking content has shifted from grinding stats to a more natural scene progression ideology, these stats served little purpose other than to give the player something to grind just for the sake of grinding. The solution was to simply remove these stats altogether and give players a new currency to grind for the same way they would grind for the old stats, then spend this currency on what are effectively The Company’s version of cosmetics. The intent behind the new system is solid, but the execution raised a few questions. After a spending a LOT of time at the whiteboard, we’ve decided to re-imagine the proposed feature, ending up with a final product that not only makes a lot more sense within the context of the game, but also manages to address a few other issues. 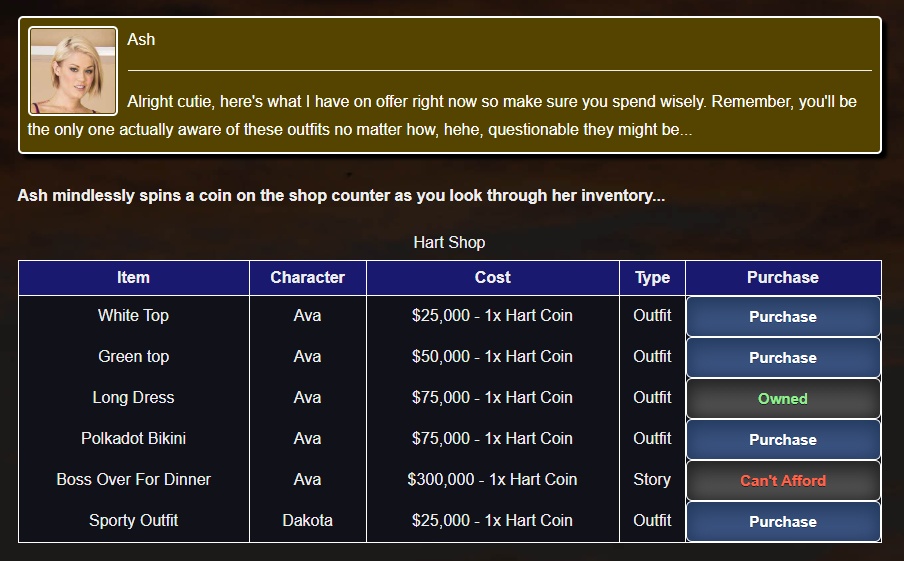 First and foremost, the coin shop is being moved from Saya’s pocket dimension over to the much more easily accessed adult toy store at the mall. Early on in the game you will happen upon a mysterious coin that will eventually have you paying Ash a visit. After learning about these coins and unlocking the new coin shops, you’ll be able to exchange a single coin along with an exorbitant amount of moneys for one of the new NPC outfits or stories. Since Ash already had ties to the more occult elements in the game, it only made sense that she would have involvement here as well.

Coins are still broken into three categories, each pertaining to a different set of characters in the game, and will be acquired through unlocking various scenes, earning achievements, and playing through the story. Actually collecting these coins will be a whole game in and of itself, but what’s more interesting is the shop’s inventory itself. This is where we go back to talking about stats!

Relationship and Corruption? Not gone after all!

At first, the coin shops will offer very little in terms of inventory. In order to unlock new outfits and stories to purchase from these shops, you’ll need to spend quality time with the actual characters you want to unlock content for. Relationship and Corruption will work on a scale, currently 0-200 but still in testing, and new items will be unlocked for characters upon reaching certain stat milestones with that character. In addition, each stat unlocks its own flavor of outfits. Increasing your Relationship with a character will grant you access to entirely wholesome outfits for you fawn over. Inversely, increasing a character’s Corruption will unlock much lewder threads for you to gawk at.

Once you’ve purchased one of these outfits, you’ll be able to apply them to the associated NPC at any time from a new menu in your room. Doing so will replace their default image in game, as well as their portrait in dialogue boxes. Capping out a character’s Relationship or Corruption will unlock a fun “What if…” story centering around that character that you’ll be able to access whenever you’d like! All in all, I think this strikes a great balance between achieving our original vision while still keeping true to the established setting of The Company.

Developing, well, anything for The Company is often an exercise in unforeseen consequences. Very few things can be changed without causing ripples, and this certainly applies to gifting NPCs with alternative outfits as well as having continuity shattering Elseworld adventures. Despite the fantastical and terrifying nature of The Company, it still operates with the confines of its established reality. Even still, fun things are fun! Seeing Penny walk around the office in a witch’s costume or getting to teach one of Dakota’s classes at the college would be a blast to see, but there’s no good way to implement that sort of thing within the game proper without having to make several adjustments down the line to account for those things having happened. The coin shop, and the mysteries surrounding both the coins and Ash herself, add a fun new layer to the game as well as serving as a great jumping off point for any future mystical side content, and it does so in a way that allows us to go wild without worrying about breaking the rest of the game.

That’s it for this week! I’ll have more information regarding the actual release of Update 3.3.0 next week so for now let me go ahead and leave you all with something I think is pretty cool! Marketing Associate backers have already seen the latest models for Diana and Tasha, but today I’d like to share them with all of you! 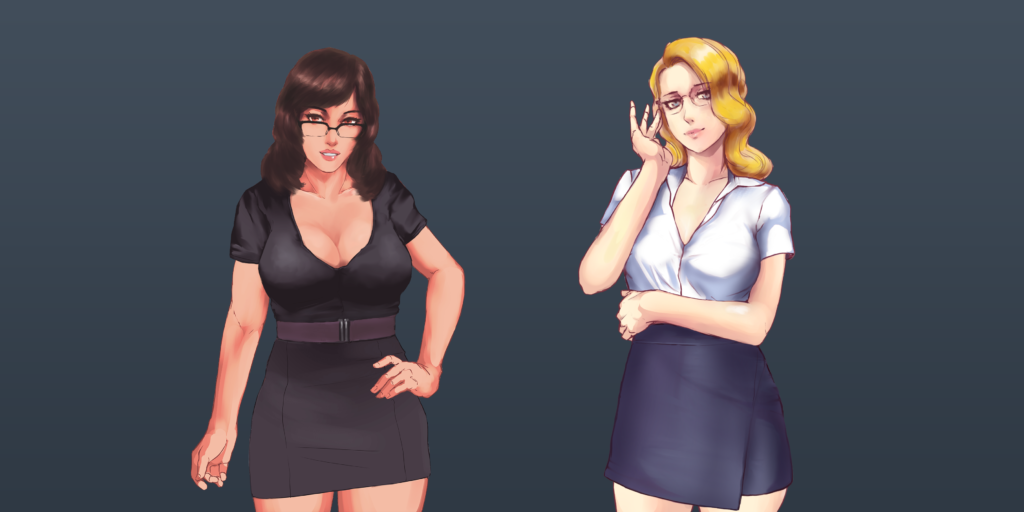 Personally, I think Tasha is the best design we’ve had to date! Anyway, that’s “really” it for this week. As always, thank you all for your continued feedback and support!